Following the integration of the viral mini chromosome, some cells ‘shut down’ the expression of RNA from the integrated viral DNA. These cells occupy tissues throughout body and serve as ‘viral reservoirs’. Even in patients who are receiving antiviral therapy and are achieving suppression of viral replication, the viral reservoirs prevent a cure because they can reactivate and establish an active spread of the virus. 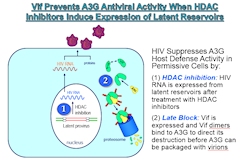 This can happen during a scheduled or unscheduled interruption of anti retroviral therapy or due to the emergency of viral strains that are resistant to the current therapies. The immune system appears to be unable to identify and eliminate these viral reservoir cells, most likely because cells in the viral reservoirs are not actively making viral protein antigens. Having integrated virus but not expressing viral proteins or viruses means that there are no traces of viral proteins on the surface of viral reservoir cells and hence the cells to not ‘smell’ like virus-producing cells to other cells that make up our immune system.

Strategies are being considered to activate expression of viral RNA and proteins from the viral reservoir cells; thereby revealing their presence to the immune system. Theoretically this would lead to immune destruction of the reservoir cells through inflammation (though this remains to be proven). 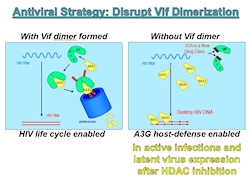 The problem is that ‘revealing’ the reservoir cells comes with a price, they make and shed new viruses. These viruses are able to actively infect cells in the body and the spreading infection increases the likelihood that the virus could be transmitted to other people through intimate contact. There is also the very real potential that the induced virus will lead to the establishment of new reservoir cells or that the virus that is expressed will represent a minor subspecies that is drug-resistant. OyaGen provides a solution to our current problems in achieving eradication as a ‘firewall’ to the spread of infection following the activation of viral reservoirs.

A very real example would be the use of histone deacetylase inhibitors (HDACi) to active viral RNA expression in the quiescent reservoir cells
. Expression of viral RNA from integrated proviral DNA is what happens normally in an HIV infection during what is referred to as the ‘late phase’ of viral infection. Viral proteins are expressed during this phase for the assembly and mature viral particles which lead to the spread of an infection. One of these late phase proteins is Vif. Vif finds, binds and induces the destruction of ‘viral restriction factors’ APOBEC3G, 3F, 3C and 3D/E and thereby ensures that none of the viral restriction factors can assemble within virions; as would otherwise happen. In this way all viruses leaving the activated reservoir cells are able to perpetuate and infection.

OyaGen’s Vif dimerization antagonist will prevent Vif-dependent degradation of the APOBEC viral restriction factors in HDACi activated reservoir cells. This will lead to APOBEC assembly within virions like ‘Greeks’ entering ‘Trojan Horses’. Most or all of the viruses leaving the activated viral reservoir cells will carry APOBEC proteins which will induce catastrophic mutations of the virus genetic code when viruses attempt to replicate. Inhibiting Vif is analogous to placing a ‘viral terminator’ in every virus particle before it leaves ‘home base.’ This is conceptually a more effect means of eradication then releasing viruses from reservoirs cells with HDACi and afterwards trying to stop infection throughout the body by treating patients with HAART.

In this way, Vif dimerization antagonists are essential in any eradication strategy.