OyaGen’s Critical Path to a Cure for HIV/AIDS

Traditional therapeutic approaches to HIV/AIDS have targeted the 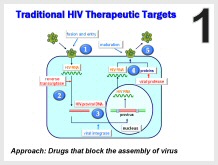 components of viral entry into white blood cells and the viral expression, assembly and maturation pathway. Commonly, these drugs disrupt or sabotage pathways or macromolecules such as protein enzymes uniquely required by the virus (see diagram 1). Replication of HIV relies heavily on normal cellular pathways and macromolecules. In the absence of robust live cells, HIV cannot sustain a productive infection. Drug discovery has avoided targeting and inhibiting cellular pathways as a therapeutic for HIV/AIDS as this approach was considered too likely to have toxic side effects. APOBEC3G or A3G is a cellular protein that naturally resides in the white blood cells and serves as a sentinel for invading genetic material. The discovery of APOBEC3G and its function as an enzyme to seek out and create devastating mutations in the HIV genetic material afforded radical new thinking…protecting A3G and enabling its attack on HIV will provide a surgical strike on HIV for a functional cure to HIV/AIDS.

HIV particles bind to surface receptors on white blood cells and this leads to their fusion with the cell membrane and cell entry (see diagram 2). In what is known as the early phase of infection, HIV particles uncoat and the viral 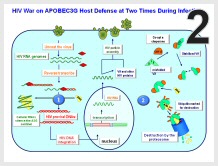 genomes begin to replicate their packaged genetic material (reverse transcription of two RNA genomes to single stranded DNAs followed by the synthesis of double stranded DNAs). HIV DNAs enter the cell nucleus and integrate into our chromosomes. In this way, HIV has become part of our cellular genetic code.

The HIV genomes are expressed by transcribing the integrated HIV DNA sequence into RNA copies, in what is known as the late phase of infection. These RNAs exit the nucleus and enter the cytoplasm where they code for viral proteins and also serve as the next generation of genomes to become packaged into new viral particles. 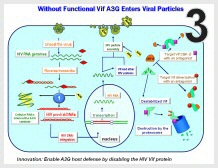 It is at this time that an HIV protein known as Viral infectivity factor or Vif is expressed (see diagram 2). Vif is a structurally unstable protein and therefore subject to degradation by the host cell. Vif finds a cellular protein known as CBF beta and uses it as a molecular chaperone to stabilize Vif’s shape so that it can assume conformations that are appropriate for other interactions. Vif interacts with itself like a pair of pliers (dimers). Stabilized and dimerized Vif finds and binds to A3G and induces the destruction of A3G by tricking the white blood cell into processing A3G as waste. Vif carries out this trick by forming a complex with several other proteins that zip code A3G for destruction with signals known as ubiquitin. The zip coding is necessary for recognition of A3G as waste by a large protein-digesting machine inside the cell known as the 26S proteosome. 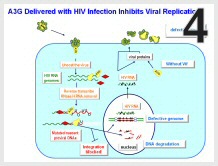 OyaGen’s Vif dimerization antagonist (SMVDA) prevents dimer formation and this protects A3G from Vif-dependent degradation (see diagram 3). This enables A3G bind to viral RNA genomes as well as an HIV packaging protein known as Gag to become part of the inner core of viral particles. Here, it waits like a Greek in a Trojan horse and leaves the cell with the viral particle. When this virion infects a new cell and begins to reverse transcribe DNA, A3G jumps onto the new single stranded 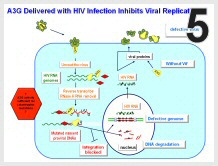 viral DNA and mutates dC to dU by deamination (removing an amine group from dC) (see diagrams 4 through 6). Numerous dC to dU changes may occur and this mutated single stranded DNA serves as the template for the second strand DNA synthesis where the dU templates dA. A3G can only act on single stranded DNA so the opportunities for mutation are numerous until the second strand is made (essentially covering up the opportunity for further A3G activity). The resulting dG to dA changes can cause catastrophic failure of the virus when it tries to encode proteins. The dU changes are not canonical DNA bases and are recognized as errors; potentially bringing about destruction of viral genomes before they integrate. 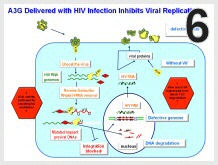 is to identify compounds that disrupt CBF beta stabilization of Vif(see diagram 3). Screening is under way for compounds that will disrupt this interaction by binding to Vif (rather than CBF beta, which is required as a regulator of cellular transcription of RNA). These antagonists of Vif stability (SMAVS) will reduced the amount of Vif in infected cells. This in turn will protect A3G from Vif-dependent degradation and production of nonproductive virus due to the assembly of A3G with virions. The destabilization of Vif therefore enables A3G host defense. 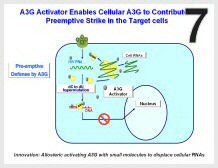 cells is in complex with cellular RNAs (mRNA, rRNA, tRNA, microRNA and endogenous retroviral elements) within the cytoplasm (see diagram 7). These ribonucleoprotein complexes or RNPs are frequently coalesced as large cytoplasmic aggregates known as P-bodies that are thought of as recycling or storage centers for RNA and RNA binding proteins.

In fact, going back to where we started, as HIV is entering the cell, most of the cellular A3G is thought to be inactive against the virus and not 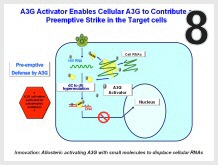 capable of host defense (see diagrams 8 and 9). Considering how very effective Vif is in destroying A3G, most virus particles lack A3G.
These virions enter the cell while A3G is inactivated by RNA and unable to engage the virus during replication. Research has shown that RNA binds to a different part of A3G (the N-terminus) than is involved in single stranded DNA binding used to mutate HIV (the C-terminus). Smith’s academic lab has shown that RNA binding to A3G can force A3G into a different conformation that is not capable of binding to DNA. 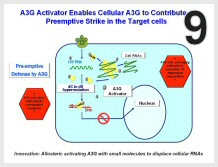 Taking advantage of the fact that RNA regulates A3G deaminase activity through another site (allosteric regulation), OyaGen targeted A3G RNA binding with small molecule antagonists of RNA binding. These chemistries have the anticipated effect of activating A3G by releasing their bound RNA. A3G activators (SMAA) enable A3G to attack incoming viruses by preventing efficient replication of their genomes as they replicate and also make more A3G available in late infection for incorporating with nascent virions
. 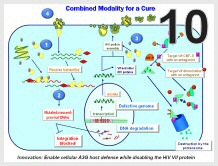 OyaGen is pursuing through development SMVDA and SMAA alone and in combination as they see these as becoming first in class treatments for HIV/AIDS (see diagrams 10 and 11). SMVDA and SMAA are likely to be so effective against drug resistant strains of HIV that this therapeutic approach could be used to produce an A3G shield of defense (preventing new infections), but also induce

the level of genetic damage to the virus necessary for a functional cure. OyaGen predicts this approach will have long lasting efficacy against the emergence of resistant strains of HIV because the Vif dimerization region is a comparatively stable genetic element in the HIV genome and, as a host cell protein, A3G will not experience genetic change during the course of treatment.