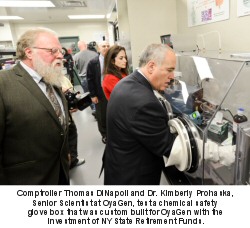 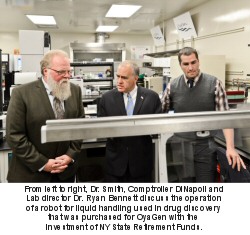 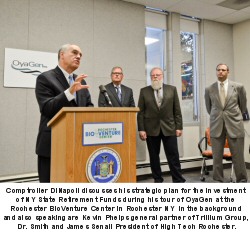 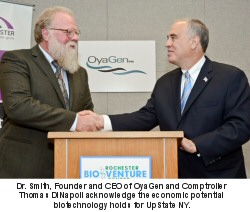 The New York State Common Retirement Fund has invested an additional $150,000 in OyaGen Inc., a Rochester-based bio-pharmaceutical company developing drug treatments for HIV/AIDS and other viral diseases, through Trillium Group, a manager in the In-State Private Equity Program, New York State Comptroller Thomas P. DiNapoli announced today at the company’s headquarters. The Fund has now invested nearly $1.4 million in the company since 2006.

“OyaGen is doing groundbreaking research right here in New York State and the pension fund is committed to helping ensure this company’s success,” DiNapoli said. “The In-State Private Equity Program helps businesses start up and grow here in New York while providing risk-adjusted returns for the state pension fund
. We are on the lookout for the next OyaGen in all corners of our state.”

After DiNapoli’s tour of OyaGen, the Comptroller will co-host a forum on investing in private businesses in New York with private equity managers and small business lenders at the University of Rochester. The event’s sponsors include University of Rochester President Joel Seligman, Assembly Majority Leader Joseph Morelle, Mark Peterson, president & CEO of Greater Rochester Enterprises and Jim Senall, president of High Tech Rochester.

The In-State Private Equity Program partners the Fund with 18 private equity managers investing in New York-based companies. The program generates market rate returns consistent with the risk of private equity for the Fund while expanding the availability of capital for New York businesses. The program has generated a 20 percent return on companies fully exited in the last five years.

More than $1 billion has been committed to the program of which $393 million is still available to invest in New York companies. In total, $684 million has been invested in 252 New York State companies. The In-State Private Equity Program has made 20 investments in Monroe, Ontario, Yates, Wyoming and Genesee Counties totaling $81.2 million.

OyaGen, a biotechnology company formed in 2003, is researching, developing, and commercializing pharmaceutical therapies that seek to exploit a new genetic approach to disease control based on their RNA editing and DNA editing enzymes technologies. Funding from the state pension fund has allowed OyaGen to purchase a robotic drug screening apparatus that enables researchers to search vast libraries of chemistries and sample them for appropriate candidates as anti-viral compounds.

“I would like to extend my thanks to Comptroller DiNapoli for his extraordinary commitment to OyaGen. Building out our infrastructure has enabled us to expand our research, which will reward the state, and science, over and over again. OyaGen’s achievements in developing a functional cure for HIV/AIDS have in no small part come from the support that the state, Trillium partners and High Tech Rochester have given us since our founding,” said Dr. Harold Smith, Founder, CEO and CSO of OyaGen.

“OyaGen faces the same challenges in raising early stage capital that many New York university technology companies experience. Without the vision and commitment of Comptroller DiNapoli to the In-State Private Equity Program, OyaGen would never have had the opportunity to realize its potential,” said Kevin Phelps, Vice-President at OyaGen and a partner at Trillium Group.

For more information on the program or company eligibility, go to: http://www.osc.state.ny.us/pension/instate/

About the Common Retirement Fund
The $160.4 billion New York State Common Retirement Fund is the third largest public pension plan in the United States with more than one million members, retirees and beneficiaries from state and local governments. The Fund has a diversified portfolio of public and private equities, fixed income, real estate and alternative instruments.

About Trillium Group, LLC
Trillium Group is a Rochester-based venture capital group with a primary focus on growth equity investment opportunities located in western New York. Trillium’s current portfolio consists of more than 20 companies in a broad range of industry sectors and businesses.

About OyaGen, Inc.
OyaGen is an emerging biopharmaceutical company focusing on the commercialization of editing enzyme technologies developed at the laboratory of Dr. Harold C. Smith at the University of Rochester Medical Center. The company targets editing enzymes as host cell defense factors against viral invaders as the basis for therapeutic drug developments for HIV/AIDS (http://youtu.be/P1ODXikMmHk) with a platform technology that embraces other viral diseases as well as certain cardiovascular conditions and cancers (https://oyageninc.com/platform-technology). OyaGen has published several papers in peer reviewed journals and received grants from the Bill and Melinda Gates Foundation and the National Institutes of Health.